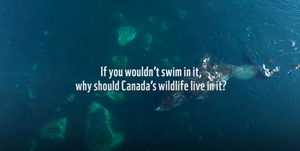 Toronto, June 08, 2021 (GLOBE NEWSWIRE) — It’s been more than two years since the federal government declared new minimum standards for marine protected areas (MPAs) that include a ban on dumping. Yet, wildlife are still waiting for the government to define this standard and reveal how it will be implemented and enforced. On World Oceans Day, World Wildlife Fund Canada is launching an advocacy campaign to hold the government to its promise and ban all dumping in MPAs.

Concerned Canadians can send an email to their federal MP, the Prime Minister and other influential cabinet ministers with one click at wwf.ca/nodumping.

WWF-Canada is asking the federal government to finally develop a comprehensive definition of dumping that prohibits the release of all harmful substances from cruise ships and commercial shipping vessels in these ecologically sensitive areas. This includes sewage and grey water, both treated and untreated; scrubber effluent, which is the washwater from exhaust gas cleaning systems; solid waste like plastics and other garbage; ballast water; and oily mixtures.

Until this definition is in place, ships will continue to dump these substances in our “protected” waters. With US President Joe Biden recently signing the Alaska Tourism Restoration Act into law, cruise ships, which disproportionately contribute to grey water discharge, will soon be passing through Canadian waters again. It’s more urgent than ever that the government get serious about dumping.

Dangerous discharges can cause ocean dead zones, worsen ocean acidification and introduce pathogens, invasive species, oil, heavy metals, microplastics, fecal contaminants, toxic chemicals and other pollutants into the protected areas of our oceans. This not only threatens whales, seabirds, fish, corals, crustaceans and other wildlife, but poses a risk to human health when these contaminants end up in the seafood we eat.

To illustrate the incompatibility of dumping and marine protection, WWF-Canada has released a video, called “Dirty Pool,” where we invited kids to swim in a pool that we told them was being filled with the same harmful waste ships are currently still dumping in MPAs. Created with the production group Makers, the video and captured their unscripted reactions.

“A ban on dumping in marine protected areas isn’t as clear as it seems. Right now, there is no common interpretation of what dumping means in the context of marine protected areas—and without a comprehensive definition, how can we expect to stop dumping from wreaking havoc in our most sensitive ocean spaces? We shouldn’t call an area ‘protected’ if the dumping of harmful substances from commercial and cruise ships, in any quantity, is allowed.”

How Canadians can advocate for #NoDumping:

About World Wildlife Fund Canada
WWF-Canada creates solutions to the environmental challenges that matter most for Canadians. We work in places that are unique and ecologically important, so that nature, wildlife and people thrive together. Because we are all wildlife. For more information, visit wwf.ca.