Five drill holes were completed at Hecla-Kilmer in November, 2022, for 1,437m. The 21 drill holes completed to date are shown on Figure 1; provided are the key REE critical metal intersections which span an area of approximately 2 x 3 km in the western half of the multiphase alkaline complex at H-K.

The mineralization at South Rim with 2.7% TREO is shown in Photo 1; apatite veins associated with carbonatite dykes and vein breccia, in country rock that is 100% replaced by hydrothermal alteration.

The volume potential for this new, mineralized structure on the South Rim is illustrated in Figure 2, on a detailed magnetic plan map and cross-section through the 3D MVI magnetic inversion model.

Multiple zones. This is the second large area of > 1% TREO mineralization discovered at Hecla-Kilmer. The new data are from two holes on the South Rim zone which is located approximately 2.5 km to the south of the REE intersections previously reported for Pike zone, such as the 461 m intersection in Hole 13 (NR23-001, January 17, 2023). Intersections in three additional areas will be followed-up in 2023: around Hole 17 to the west of Pike Zone; around Hole 16 in the center of the complex, and; around Hole 1 to the southeast of Pike Zone.

PMREO grade.  The consistent 16 – 28% proportion of PMREO in the TREO mineralization at South Rim is consistent with mineralization at Pike Zone located 2.5 km to the north. This ratio is important because of the high value of the PMREOs in response to the demand for permanent magnets in EVs and wind turbines. For comparison, published resources for most Canadian LREE deposits in carbonatite generally contain between 12-15% of the high value PMREO (e.g. neodymium), which is roughly 40% lower than the proportion at Hecla-Kilmer.

Lateral scale. Like at Pike Zone, REE mineralization in Holes 15, 19 and 20 at the South Rim is associated with carbonatite dykes, veins and vein breccia within high temperature, hydrothermal potassic alteration that is both intense and widespread, characterized by mineral assemblages dominated by magnetite, biotite, apatite, carbonate and disseminated sulfide. Importantly, these broad alteration envelopes on structure are also mineralized, as in the carbonatite dyke swarm of sovite breccia in Hole 19, shown in Photo 1; the sovite breccia is the southern shoulder to the mineralized structure which was intersected in Holes 15 and 20, which were inclined to the north and northeast respectively.

Consider that the South Rim is now the fourth area of mineralization at Hecla-Kilmer with grades in individual veins and breccia zones with 1 – 3 % TREO and containing 16 – 28 % PMREO:

Next Steps Planned for the Hecla-Kilmer Project in 2023

This REE critical metal discovery at H-K has progressed continuously since mineralization was first intersected at surface in Hole 4 during the first reconnaissance program in October, 2020. Since then, VR has expanded geochemical techniques to include analysis by lithium-borate fusion to optimize detection of all REEs, and utilized QEMSCAN thin section analysis to characterize REE mineralogy. Going forward:

Follow-up drilling is planned for the spring of 2023. It will focus on supporting the afore-mentioned advanced-stage studies at Pike Zone, and completing additional exploration drill holes on the other three areas of mineralization discovered to date.

Overall, the path forward for this emerging discovery is strengthened by its location, just 23 km to the west of the provincial hydroelectric dam at Otter Rapids, with supporting and active Ontario Northern railroad and Highway 634 infrastructure.

Summary technical and geological information for the Company’s various exploration properties is available at the Company’s website at www.vrr.ca.

VR submits sawn drill core samples for geochemical assay to the ALS Global Ltd. (“ALS”) laboratory facilities in Timmins or Thunder Bay, Ontario, with final geochemical analytical work done at the ALS laboratory located in North Vancouver, BC., including lithium borate fusion, ICP-MS and ICP-AES analyses for base metals, trace elements and full-suite REE analysis, and gold determination by atomic absorption on fire assay. Analytical results are subject to industry-standard and NI 43-101 compliant QAQC sample procedures, including the systematic insertion of sample duplicates, blanks and certified reference material (CRM) done both externally on the project site by the Company and internally at the laboratory by ALS, as described by ALS.

Technical information for this news release has been prepared in accordance with the Canadian regulatory requirements set out in National Instrument 43-101. Justin Daley, P.Geo., VP Exploration and a non-independent Qualified Person oversees all aspects of the Company’s mineral exploration projects, and the content of this news release has been reviewed on behalf of the Company by the CEO, Dr. Michael Gunning, P.Geo., a non-independent Qualified Person.

The Hecla-Kilmer complex is located 23 km northwest of the Ontario hydro-electric facility at Otter Rapids, the Ontario Northland Railway, and the northern terminus of Highway 634 which links the region to the towns of Cochrane and Kapuskasing to the south, itself located on the northern Trans-Canada Highway.

The H-K property is large. It consists of 224 mineral claims in one contiguous block approximately 6 x 7 km in size and covering 4,617 hectares. The property is owned 100% by VR. There are no underlying, annual lease payments on the property, nor are there any joint venture or back-in interests.

Hecla-Kilmer is located on provincial crown land, with mineral rights administered by the Ontario Ministry of Northern Development, Mines, Natural Resources and Forestry (“MNDM”). There are no annual payments, but the MNDM requires certain annual exploration expenditures and reporting. The property falls within the traditional territories of the Moose Cree and Taykwa Tagamou First Nations.

VR is an established junior exploration company focused on greenfield opportunities in critical metals, copper and gold (TSX.V: VRR; Frankfurt: 5VR; OTCQB: VRRCF). VR is the continuance of 4 years of active exploration in Nevada by a Vancouver-based private company. The foundation of VR is the diverse experience and proven track record of its Board in early-stage exploration, discovery and M&A. The Company is well-financed for its exploration strategies and corporate obligations, and focuses on underexplored, large-footprint mineral systems in the western United States and Canada. VR owns its properties outright and evaluates new opportunities on an ongoing basis, by staking or acquisition.

ON BEHALF OF THE BOARD OF DIRECTORS: 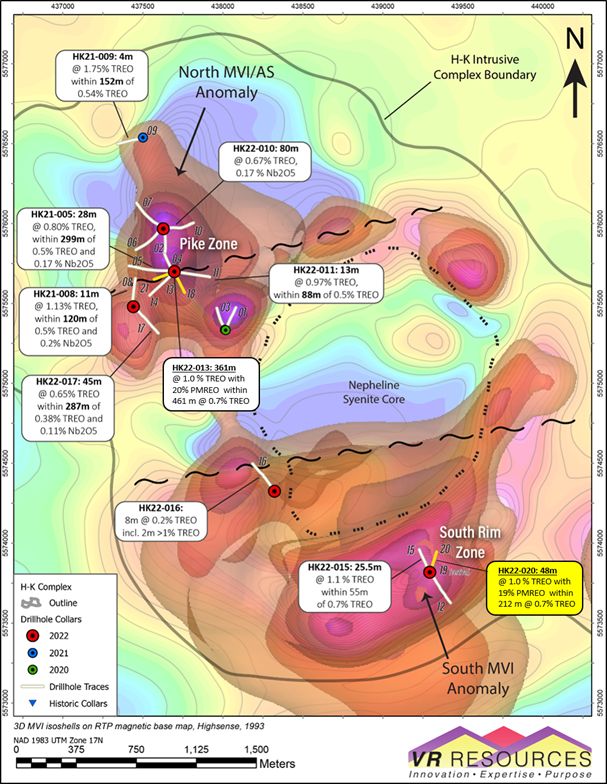 Figure 1. Locations of the 21 drill holes completed to date at Hecla-Kilmer, plotted on a contoured RTP magnetic base map with superimposed 3D iso-shells from the MVI inversion. Key intersections for critical metal are highlighted for the first 19 holes for which data are received, with data from the two final holes pending.

A photo accompanying this announcement is available at https://www.globenewswire.com/NewsRoom/AttachmentNg/dc327cec-f138-44fe-86a5-6ca896e18eee 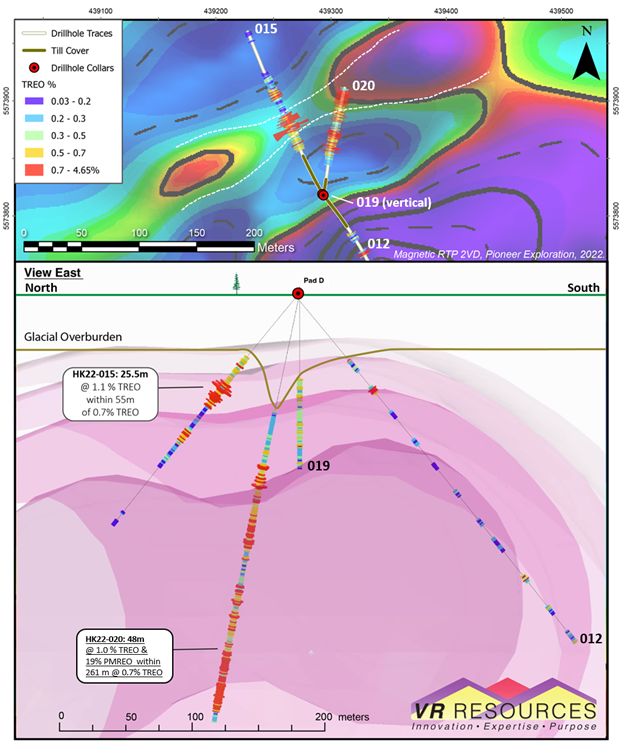 Figure 2. Drill hole HK22-020 plotted on the detailed, 2VD magnetic map derived from the high resolution drone magnetic survey completed in 2022. Note the strong correlation of mineralization in drill holes 015 and 020 to the northeast-southwest grain of magnetic gradients, providing a clear vector for follow-up drilling. High PMREO content is maintained along the trend. See Figure 1 for the location of Holes 15 and 20 relative to the entire Hecla-Kilmer complex. 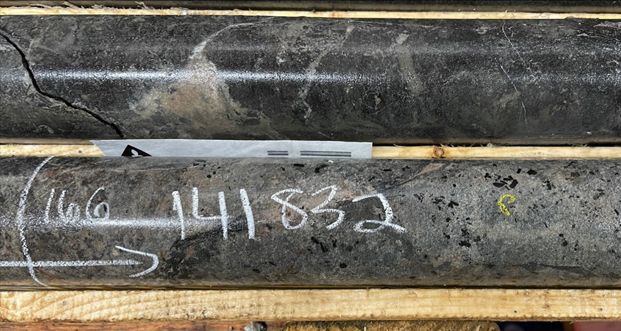 A photo accompanying this announcement is available at https://www.globenewswire.com/NewsRoom/AttachmentNg/cc1fefc3-1907-4356-ad4d-b647e2778ef3 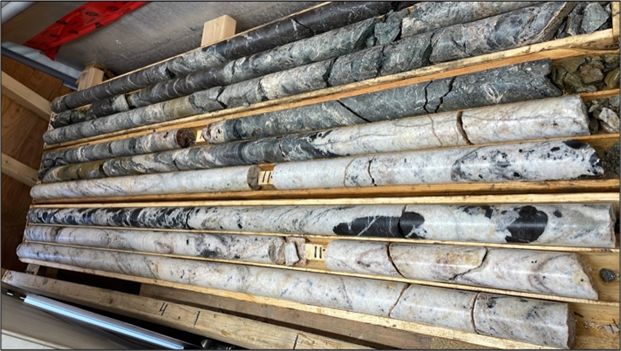 Photo 1. South Rim Zone. Top Photo: carbonatite dyke (phoscorite) with REE-rich apatite and monazite matrix, and small biotite phenocrysts at 166m with 2.85% TREO including 28.5% PMREO within 261m at 0.7% TREO. Bottom photo: core bench photo of carbonatite (sovite) dykes and vein breccia observed over tens of metres in HK22-019. This is the first observation of apatite (orange-pink) in a sovite (white calcite carbonatite) at H-K. This new occurrence of mineralized sovite is a proximal indicator to the intense REE mineralization in holes 15 and 20.

A photo accompanying this announcement is available at https://www.globenewswire.com/NewsRoom/AttachmentNg/68e19ccd-4622-436c-b98b-7ac7f224656b 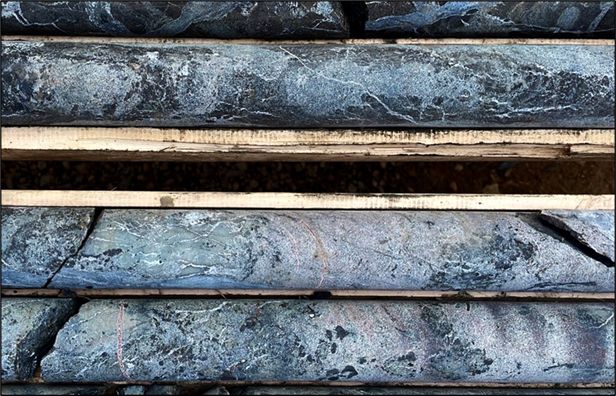 Photo 2. Pike Zone. Photograph of drill core with 2.2% TREO and 19% P205 at 219m in drill hole HK22-013. Rare earth element mineralization is amongst a myriad of carbonatite dykes (phoscorite and sovite) which themselves are cut by fluorite-rich carbonate veins. Protolith alkaline igneous rocks are completely replaced by a potassic alteration assemblage dominated by hydrothermal biotite.

A photo accompanying this announcement is available at https://www.globenewswire.com/NewsRoom/AttachmentNg/e10ec0c5-0cb9-4d11-80ba-afa3e28bbf1d 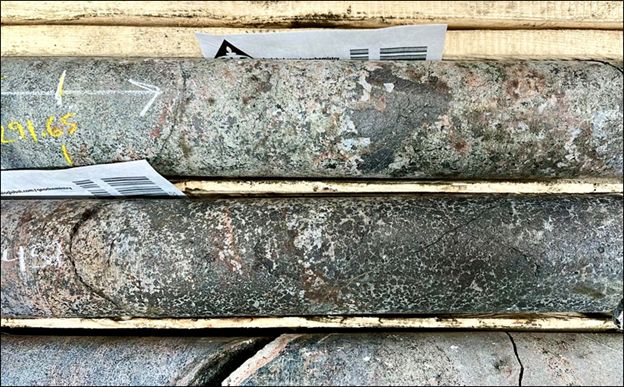 Figure 3. West of Pike Zone. Photograph of drill core with 3.3% TREO at 291.65 m in drill hole HK22-017 located half a kilometer southwest of Pike Zone. The high grade TREO occurs towards the end of an overall intersection of 287 m of continuous TREO + Nb mineralization. The drill hole is located on a RTP magnetic anomaly 200 x 700 m in size. The core shows aggregates of magnetite in a near total calc-potassic fenite replacement of the host rock by calcite, apatite, REE minerals (monazite & bastnaesite), and amphibole.

A photo accompanying this announcement is available at https://www.globenewswire.com/NewsRoom/AttachmentNg/5ebc5036-c443-4fd6-bdeb-6b6196426521 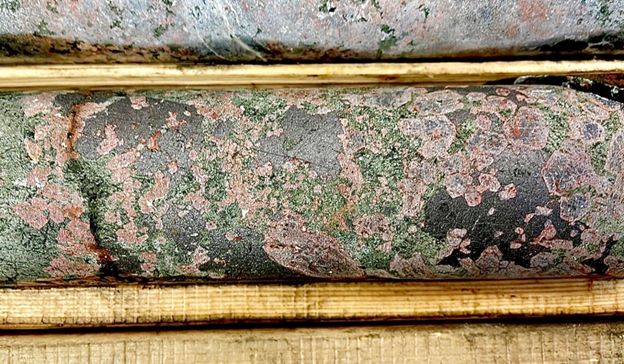 Photo 4. Central core of complex. Photograph of drill core with 1% TREO and 19% Fe2O3 at 94m in drill hole HK22-016. This drill hole ran down the edge of the MVI anomaly shown in Figure 1 and will be followed up by testing the heart of the MVI anomaly. The REE mineralization is within an alkaline host rock that is completely replaced by a sodic alteration characterized by pristine crystals of hydrothermal actinolite and magnetite cementing relic nepheline and orthoclase crystals, themselves altered to sodalite.

A photo accompanying this announcement is available at https://www.globenewswire.com/NewsRoom/AttachmentNg/dd509769-d8dc-4793-a99d-6f342bcda03b