VR has now completed 22 drill holes for a total of 8,767 m at Hecla Kilmer, in four programs starting in the fall of 2020. The locations of all holes are shown on the property-scale magnetic map in Figure 1.

The exploration camp established in 2020 at the terminus of Highway 634 at the Otter Rapids hydroelectric facility again provided for efficient and cost-effective logistics for the six week program.

The Company is able to submit its drill core samples for geochemistry to the laboratory in Timmins in sequence, as each drill hole is completed, because Timmins is just a three hour drive south from camp. The Company expects to receive final data through the upcoming months of December and January.

From VR’s CEO, Dr. Michael Gunning, “We are extremely pleased that the fall weather window this year facilitated our strategy to complete a fourth drill program at Hecla-Kilmer and to get our first reconnaissance test hole into the large magnetic anomaly at our Northway property located just 12 km to the northeast.

The discovery process at Hecla-Kilmer began with REE mineralization discovered at surface in Hole 4 of the first program in the fall of 2020. It has advanced to delineation drilling upon intersecting mineralization in 11 of 17 holes in three successive programs since. The goal of this fourth program was to complete additional drill holes into the two main areas with known higher grade critical metal mineralization in order to begin the assessment of their potential for mineral volume.

We believe we achieved our goal with this drilling. Rare earth element mineralization in the first 17 holes at Hecla-Kilmer is most strongly associated with zones of carbonatite dykes and hydrothermal breccia, and more specifically, phoscorite carbonatite dykes and veins with prismatic apatite and cockade biotite and magnetite on vein selvages. Provided here are three core photos which illustrate these associations in the recent drilling: Photo 1 & Photo 2 – phoscorite veins with apatite shown from Hole 18 and Hole 13 extension respectively and; Photo 3 – carbonatite dykes and hydrothermal breccia shown from Hole 19 from the south rim of the complex, which tests for mineralization directly below the collar for the high grade intersection in Hole 15 from last spring.

A comment on Northway. The sixth and final hole of the program was completed on the Northway property and magnetic anomaly located 12 km to the north of H-K. The hole was completed to 282 m, target depth into the heart of the 3-D MVI magnetic inversion anomaly derived from our ultra – high-resolution drone magnetic survey completed in April. The MVI anomaly is anchored by a northeast-southwest structure that crosscuts the 1.3 km in diameter, circular magnetic anomaly at Northway. We believe we intersected our target at Northway on the first hole; a diatreme breccia pipe that comes to basement surface below the cover of till and Paleozoic sediment. Additional information on this new intercept will be forthcoming shortly.”

Background for the Emerging Discovery at Hecla-Kilmer

Hecla-Kilmer (“H-K”) is a large and multiphase alkaline intrusive complex with carbonatite. It is 4 – 6 km in size, Proterozoic in age, and was emplaced along the western margin of the crustal-scale Kapuskasing structural zone which bisects the Archean Superior Craton in northern Ontario.

Ashland Oil and Elgin Petroleum did reconnaissance drilling at H-K in 1970 as part of a regional base metal exploration program. A scant 854 m were completed in five holes, all located on magnetic highs in the outer concentric zones of the complex. No geochemical sampling or data are reported. The Aquitane Company of Canada also explored the region in the early 1970’s, doing reconnaissance geophysics and twelve follow-up drill holes focused on the Paleozoic Hudson shelf carbonates and basal arenites. Selco Exploration Company completed two drill holes in 1981 on peripheral magnetic highs as part of a regional diamond exploration program. After this historical drilling, a regional airborne magnetic survey was completed in 1993 for ongoing diamond exploration in the region, and it provided a new and high-resolution of detail for the entire H-K complex.

The opportunity for VR is to be the first company to apply modern IOCG and carbonatite mineral deposit models to explore the multiphase H-K complex and hydrothermal breccia system as a whole, and to use new exploration technologies not previously available when the historic drilling was done.

VR completed the first airborne EM survey over H-K in June, 2020, using the state-of-the-art VTEM+ system of Geotech Ltd. Flown at 100 m line spacing over a 6 x 7 km survey block for a total of 450 line-km, the data provide a high resolution of detail. The Company also completed an independent, 3-D inversion of both magnetic and EM data, for improved modeling of the complex in three dimensions. A detailed, ground-based gravity survey covering an area of 1.5 x 3.5 km was completed in the winter season of 2021, with high-resolution data generated from 597 stations on an equant grid spacing of 100 m.

VR completed four drill holes for a total of 1,971 m in October, 2020, targeting the northern MVI (magnetic inversion) anomaly at H-K. In October, 2021, the Company followed up that drilling with the completion of 5 additional holes for a total of 2,604m, targeting the high contrast, 3.5 mGal gravity anomaly that is co-spatial with, but slightly offset from the MVI magnetic anomaly. Fluorite-carbonate hydrothermal breccia with carbonatite dykes and vein breccia was discovered in Holes 2 & 4. It comes to surface, and extends to more than 500 m vertical depth. It is hosted in a high temperature, sulfide-bearing calc-potassic alteration system which completely overprints original alkaline and carbonatite host rocks. Broad, intersections up to 299 m long are polymetallic in nature, with critical metals including both light and heavy rare earth elements, yttrium, niobium, phosphorous and iron, with copper sulfide locally, and gold elevated in phonolite dykes on controlling structures.

A state-of-the-art, ultra- high-resolution drone magnetic survey completed over the northwestern part of the H-K complex in the fall of 2021, and was expanded in the winter season of 2022. The final survey is 3.4 x 4.5 km in size, comprising 121 lines at both 25 and 50 m line-spacing for a total of 410 line-km. A third drill program was completed at Hecla-Kilmer in May-June of 2022, to follow up on the broad, polymetallic intersections of critical metals in 2020 and 2021 by using the analytic signal (“AS”) magnetic anomalies derived from the new drone airborne survey as an indication of higher concentrations of hydrothermal magnetite. A total of 2,751 metres were completed in eight drill holes ranging from 249 – 378 metres long. Key results include:

VR has now intersected high grade Critical Metal mineralization with > 1% TREO with a proportion of PMREO from 18-21 % in 11 of the first 17 drill holes completed to date with geochemical data in hand. The mineralization is at or near surface in three different areas that are 2.5 km apart. Drilling is still at a very early stage at H-K, yet the 17 holes demonstrate both the lateral and vertical scale of the hydrothermal breccia and alteration system, and the high value nature of the polymetallic critical metal mineralization.

Summary technical and geological information for the Company’s various exploration properties is available at the Company’s website at www.vrr.ca.

VR submits sawn drill core samples for geochemical assay to the ALS Global Ltd. (“ALS”) laboratory facilities in Timmins, Ontario, with final geochemical analytical work done at the ALS laboratory located in North Vancouver, BC., including lithium borate fusion, ICP-MS and ICP-AES analyses for base metals, trace elements and full-suite REE analysis, and gold determination by atomic absorption on fire assay. Analytical results are subject to industry-standard and NI 43-101 compliant QAQC sample procedures, including the systematic insertion of both sample duplicates and geochemical standards done both externally on the project site by the Company and internally at the laboratory by ALS, as described by ALS.

Technical information for this news release has been prepared in accordance with the Canadian regulatory requirements set out in National Instrument 43-101. Justin Daley, P.Geo., VP Exploration and a non-independent Qualified Person oversees all aspects of the Company’s mineral exploration projects, and the content of this news release has been reviewed on behalf of the Company by the CEO, Dr. Michael Gunning, P.Geo., a non-independent Qualified Person.

The Hecla-Kilmer complex is located 23 km northwest of the Ontario hydro-electric facility at Otter Rapids, the Ontario Northland Railway, and the northern terminus of Highway 634 which links the region to the towns of Cochrane and Kapuskasing to the south, itself located on the northern Trans-Canada Highway.

The H-K property is large. It consists of 224 mineral claims in one contiguous block approximately 6 x 7 km in size and covering 4,617 hectares. The property is owned 100% by VR. There are no underlying, annual lease payments on the property, nor are there any joint venture or back-in interests.

Hecla-Kilmer is located on provincial crown land, with mineral rights administered by the Ontario Ministry of Northern Development, Mines, Natural Resources and Forestry (“MNDM”). There are no annual payments, but the MNDM requires certain annual exploration expenditures and reporting. The property falls within the traditional territories of the Moose Cree and Taykwa Tagamou First Nations.

VR is an established junior exploration company focused on greenfields opportunities in critical metals, copper and gold (TSX.V: VRR; Frankfurt: 5VR; OTCQB: VRRCF). VR is the continuance of 4 years of active exploration in Nevada by a Vancouver-based private company. The foundation of VR is the diverse experience and proven track record of its Board in early-stage exploration, discovery and M&A. The Company is well-financed for its exploration strategies and corporate obligations, and focuses on underexplored, large-footprint mineral systems in the western United States and Canada. VR owns its properties outright and evaluates new opportunities on an ongoing basis, whether by staking or acquisition.

ON BEHALF OF THE BOARD OF DIRECTORS:

This press release contains forward-looking statements. Forward-looking statements are typically identified by words such as: believe, expect, anticipate, intend, estimate, postulate and similar expressions or those which, by their nature, refer to future events. Forward looking statements in this release include those related to the companies upcoming plans, such as “we anticipate receiving data through the upcoming months of December and January”, and “VR evaluates new opportunities on an ongoing basis, whether by staking or acquisition.” 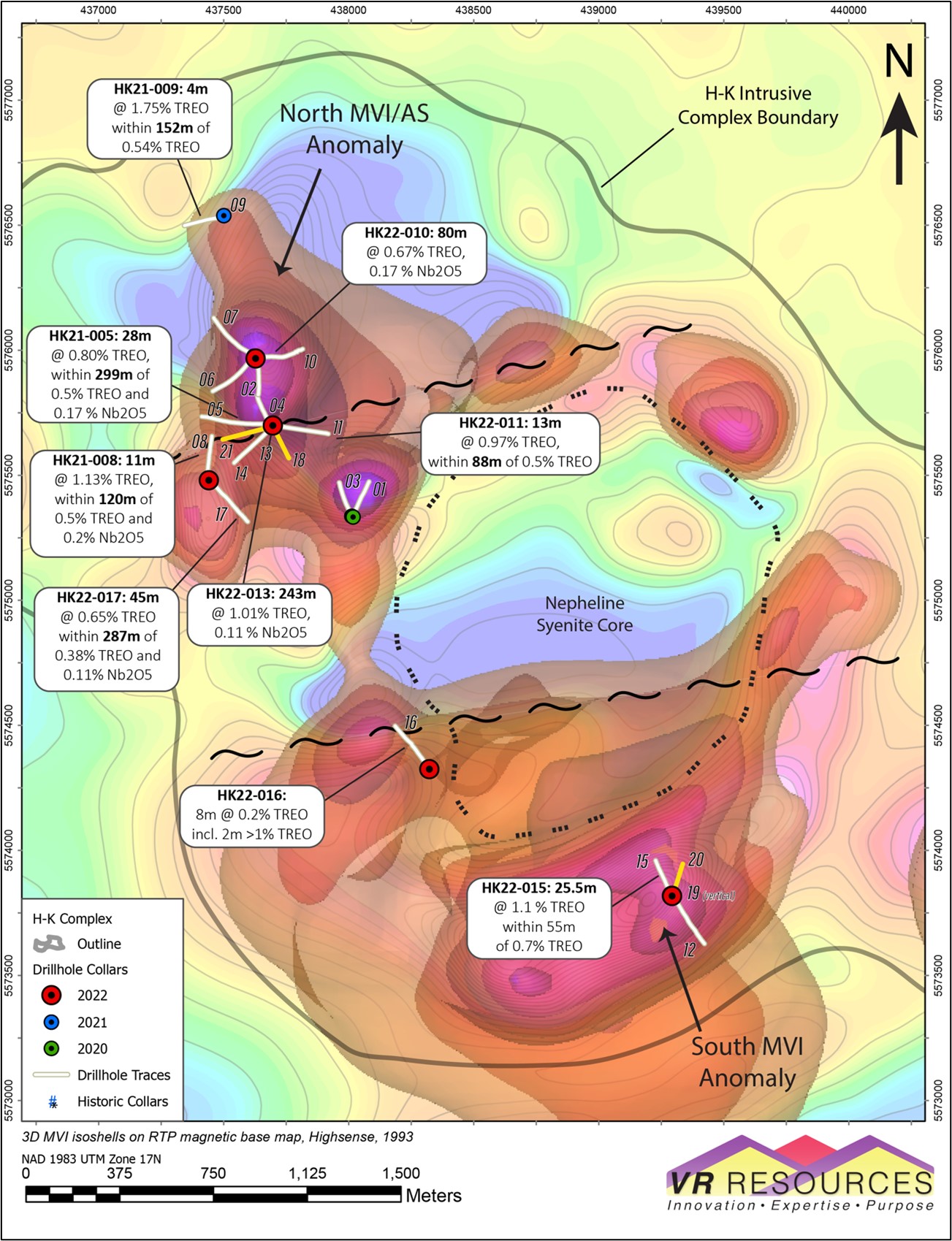 Figure 1. Key critical metal intersections from the first 17 drill holes completed at Hecla-Kilmer, and locations of the five new holes completed in October, 2022, all plotted on a contoured RTP magnetic base map with superimposed 3D isoshells from the MVI inversion. 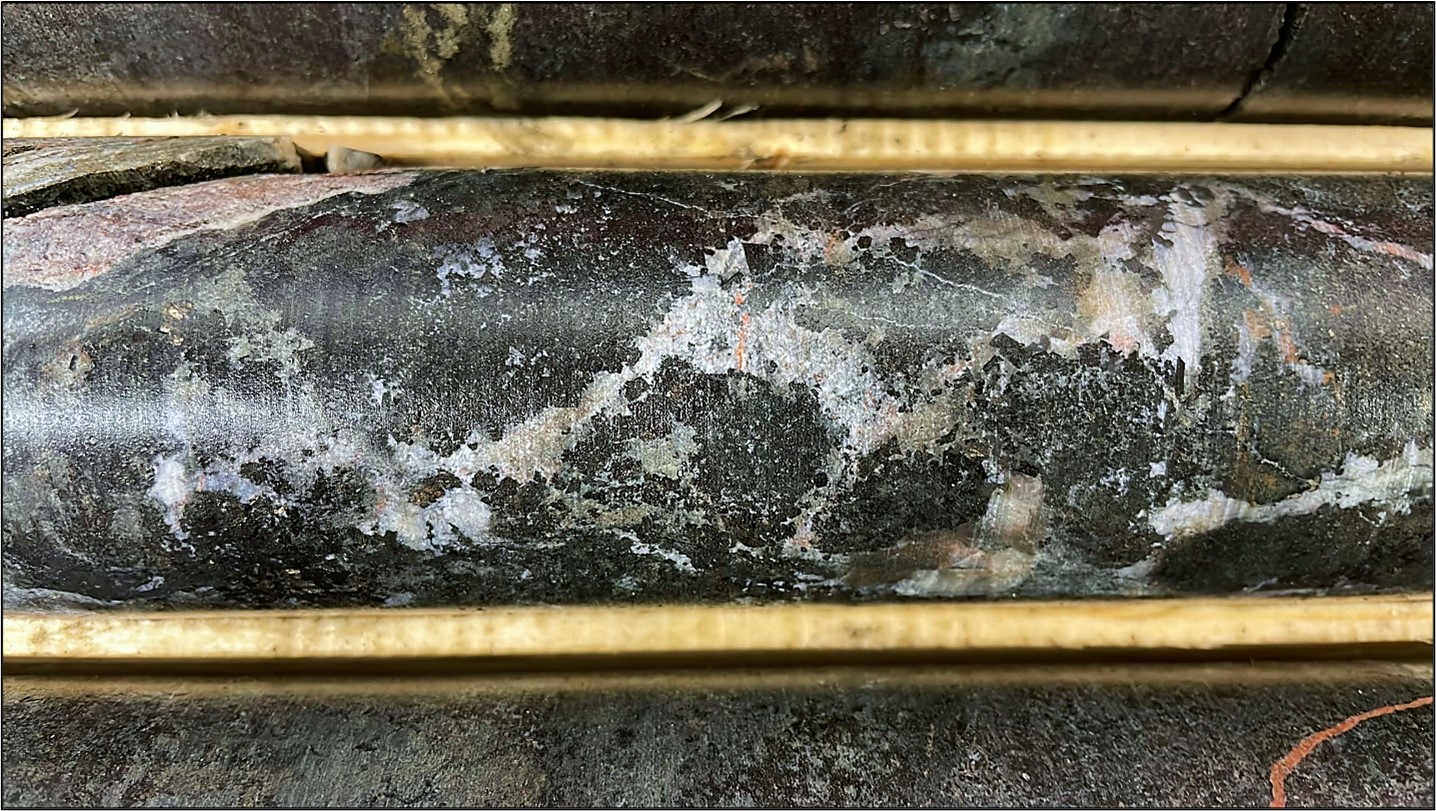 Photo 2. Drill core from 439m depth in the extension of HK22-013 where drilling finished in mineralization last spring. The totally biotite replaced host rock has been brecciated and infilled by a dense network of calcite-apatite veins with 2-5mm biotite crystal growths on the margins. 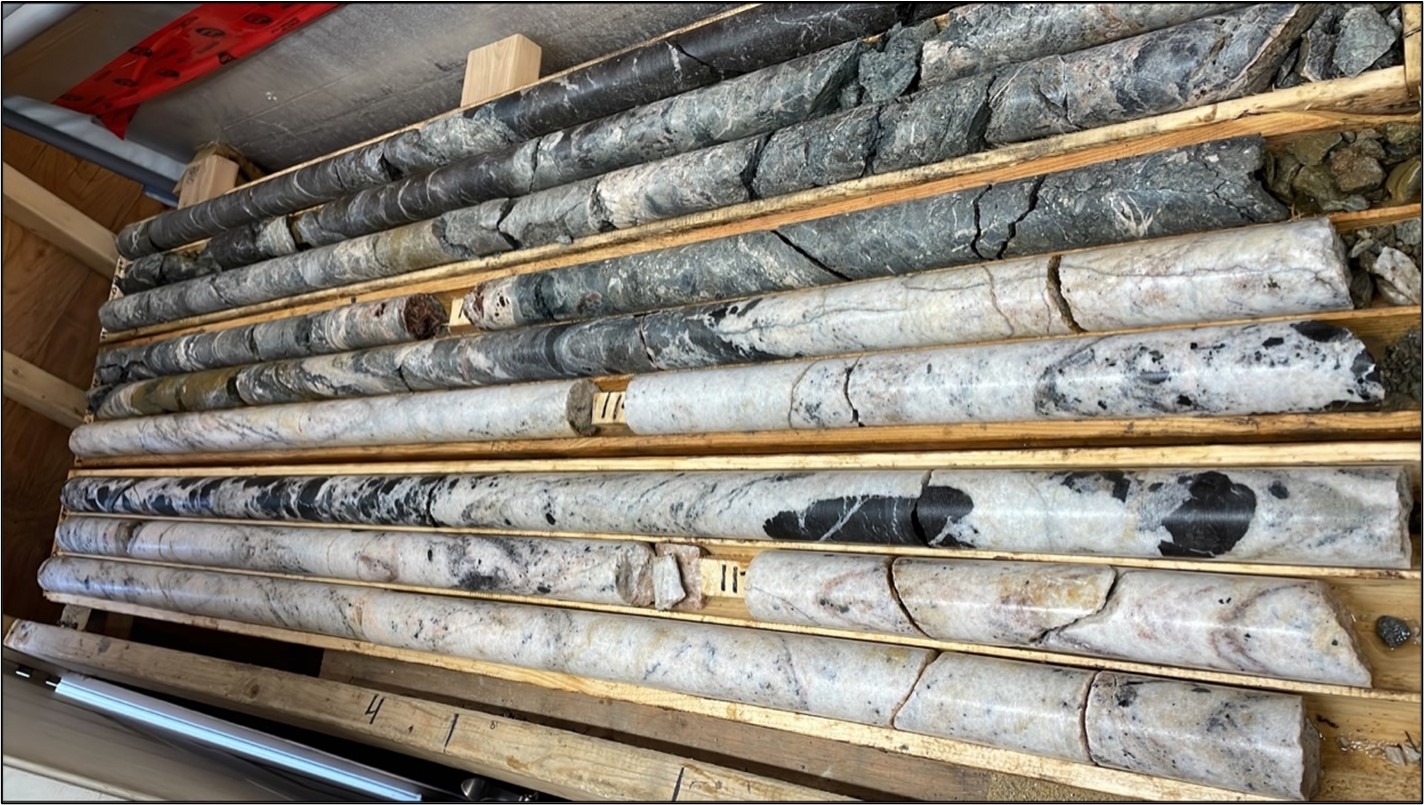 Photo 3. Core bench photo of carbonatite (sovite) dykes and vein breccia observed over 10’s of metres in HK22-019 on the southern rim of the Hecla-Kilmer alkaline intrusive complex. Unique to this zone are the fine grains of biotite-amphibole and apatite streaming through the calcite-dominated sovite dykes. This vertical hole was drilled from the same pad as the 55.2 metres at 0.70% TREO at a lateral distance of roughly 60 metres at this depth.