Note: Further intercept details including significant intercepts within composite intervals can be found in the appendices to this document.

“During the course of 2022, Mandalay has been focused on confirming grade continuity through Shepherd and extending the veining horizon both at depth and to the south. The ongoing drilling at Costerfield is achieving these goals, however, the programs are not yet complete and will progress into 2023 before the potential of the Shepherd trend is better understood. Excitingly, drilling has intercepted a potential third veining horizon within the Shepherd domain. This new discovery is slightly deeper and further to the west of the domain and could represent the continuation of a stepped progression of gold concentration across structures.

“The results of the infill program have largely supported the findings discussed in our previous Shepherd update (see October 5 2021, press release) with the northern and southern higher-grade domains within Shepherd confirmed and, in the case of the Suffolk vein, improved results in both the northern and southern extents . Furthermore, the transition from Youle to Shepherd has now been mined on 13 levels with in-mine sampling showing strong correlation to drilling.

“Mandalay has also been focused on investigating the surrounds of the upper Youle and Kendal area. Two areas have emerged with the potential to be near mine sources of ore and are a focus of continued exploration.

“Currently, drill platforms underground are not optimally placed for the emerging veining system at depth at Costerfield. Mandalay is currently designing a purpose-built drill drive that will extend from the Shepherd underground infrastructure. This location will allow for shorter drill holes and will access the veining at a more favourable angle. In the meantime, Mandalay is taking the opportunity to progress on other near mine and regional targets with a view to discovering and developing new deposits within the Costerfield region.”

A video has been prepared by Mr. Chris Davis, Vice President of Operational Geology and Exploration, to further explain the information in this release. The video can be found on Mandalay’s website or by clicking here.

The Shepherd veining system contains a series of gold bearing quartz veins that, in some locations, also contains stibnite. The gold within the veining is characterized as being of coarse grain size. This characteristic lends itself to greater variability in gold grades across intercepts compared to those seen in the Youle orebody. As such, Mandalay has invested in further drilling to increase the confidence of high-grade domains as well as sparsely drilled extensions. Since the last update in October 2021 a further 57 holes have been drilled into the inferred veining of Shepherd, improving grade confidence through these areas. 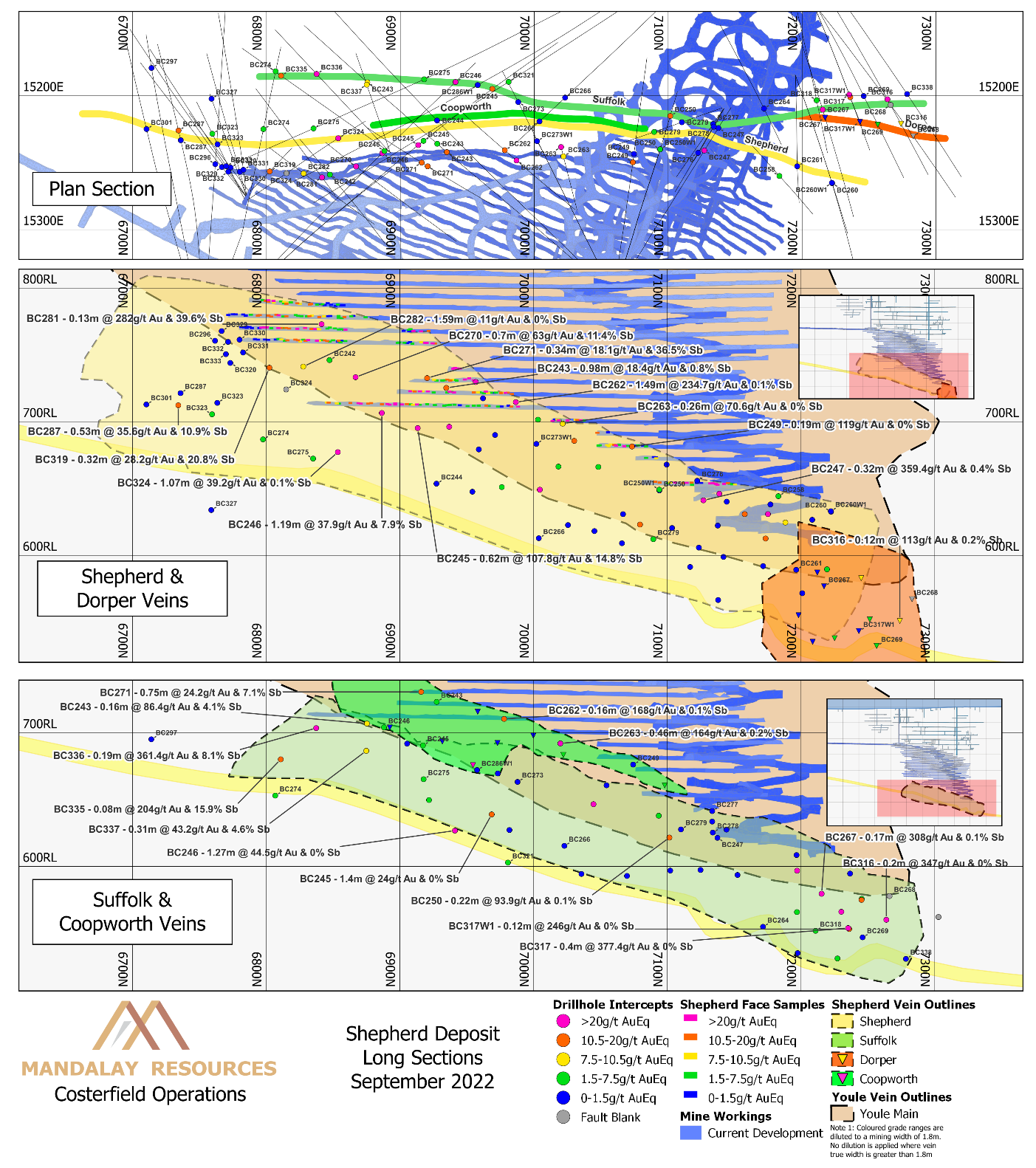 Figure 2. Longitudinal sections of Shepherd and Suffolk veining with new results labelled with hole ID. Results of grade above 7.5 g/t AuEq when diluted to 1.8m are also annotated with estimated true width and grade.

Figure 3. BC335 Core tray showing quartz-stibnite veining representative of the southern portion of the Suffolk vein.

During 2022, Mandalay has also embarked on an extension drilling program of the Shepherd veining. Navigational drilling and long, sweeping drillholes from surface have been required in order to access some of the areas due to a lack of appropriate drilling platforms underground, leading to the extension program progressing slowly. To this end, Mandalay is designing an appropriate, purpose-built underground drill platform to further access the areas required.

Initial drill results, however, are encouraging and show the system is mineralized for a further 150 m below previous drilling and a further 300 m to the south. Two intercepts approximately 50 – 100 m below previous known mineralization and 170 m from each other show good potential for an extension immediately below the higher-grade southern portion of Shepherd veining. These intercepts are 332g/t gold over 0.33 m (ETW 0.30 m) in BC274W1 and 46.7 g/t gold over 0.27 m (ETW 0.15 m) in BC342W1 (Figure 4). 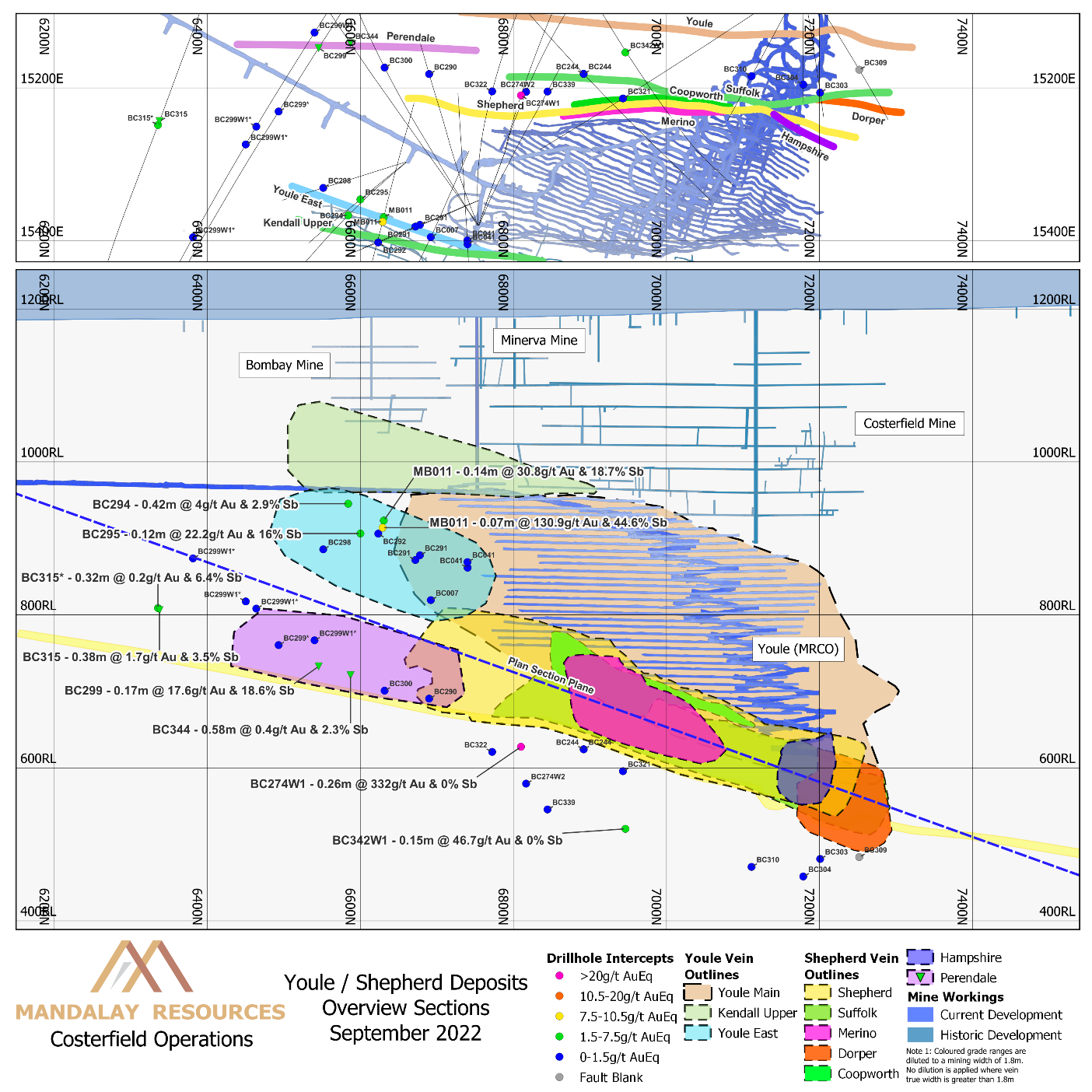 Figure 4. Longitudinal and inclined plan section of Shepherd system showing the outlines of known shepherd veining and results from the extension drilling programs. The location of the Youle East program is also shown. Results of grade above 1.5g/t AuEq when diluted to 1.8 m are also annotated with estimated true width and grade. 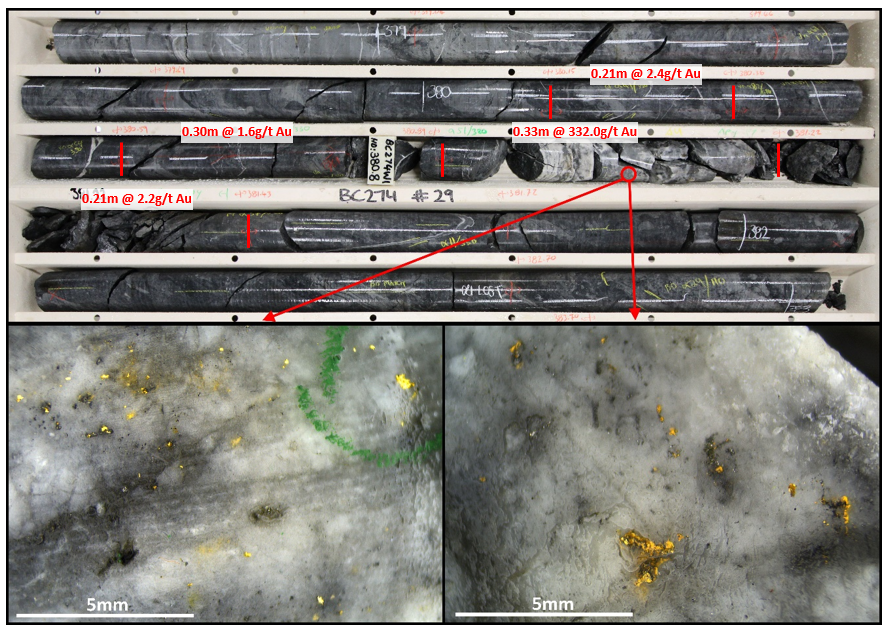 Figure 5. Tray photograph and photomicrographs of the Shepherd depth extension intercept in BC274W1 showing gold within the veining. Note the appreciable amount of gold visible below the surface of the quartz at bottom left.

The southern portion of Shepherd is yet to be sufficiently understood, however, an intercept furthest south along the Shepherd trend (BC315) could be an indication of grade building again along strike. Repetition of grade shoots at Costerfield is common within the Augusta and Cuffley deposits which exist along trend of Shepherd approximately 1.5 km to the south.

Excitingly, this drilling campaign has also highlighted another veining horizon to the west which has now been intercepted in three drill holes. When projected north this veining could parallel the Shepherd veins and be a host for a westward grade step across the Shepherd system. This potential is the focus of near future exploration.

At depth the Shepherd system appears to progress through a series of westward offsets over flat lying laminated quartz veins. The system at depth remains underexplored and with the encouraging results of BC274 and BC342W1 the area remains a high priority for near future exploration by Mandalay. 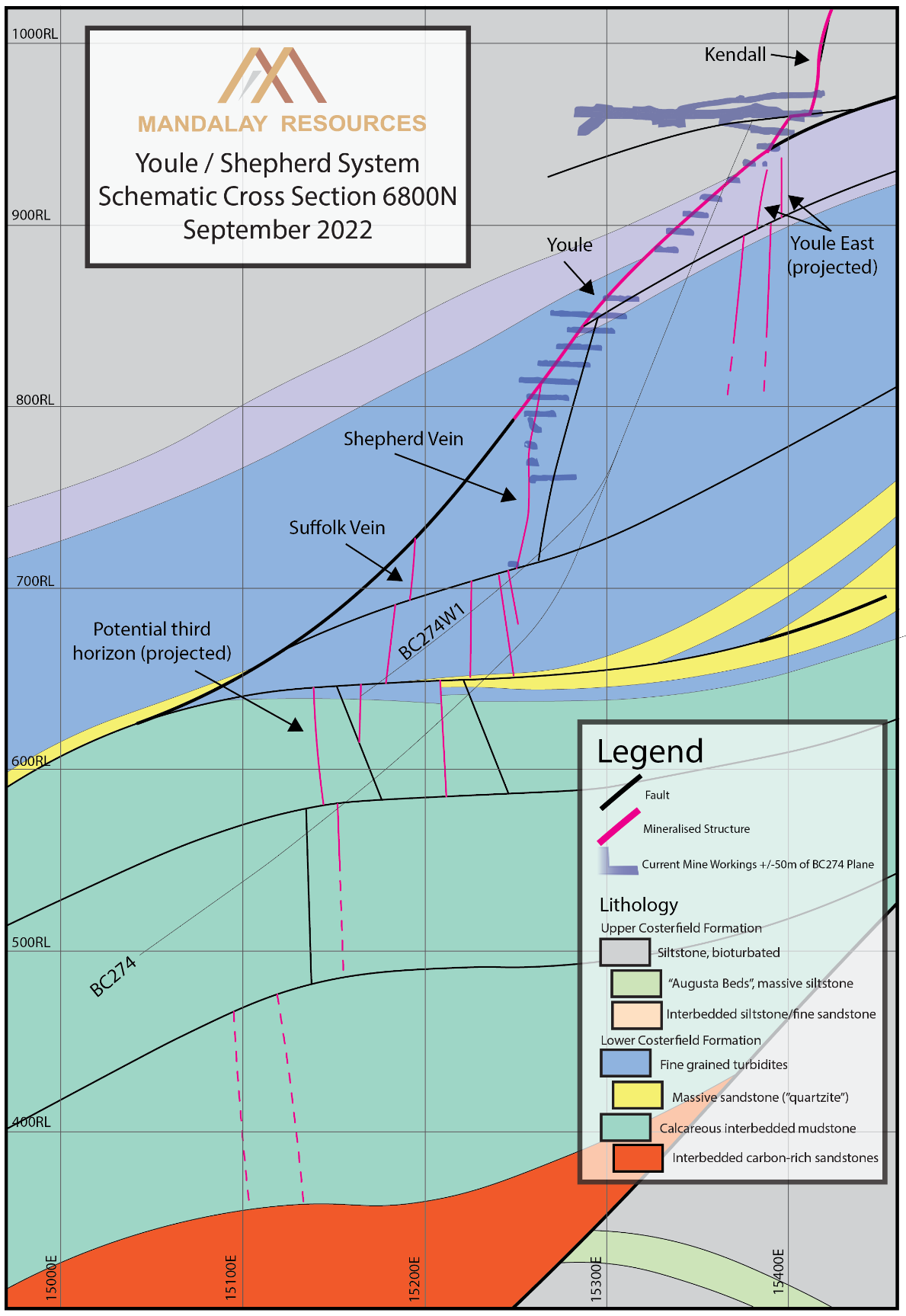 Figure 6. Cross-section of the Shepherd and Youle system showing the location of veining highlighting the stepped nature of Shepherd at depth.

Above the southern extension to Shepherd and again within the footwall of Youle, further veining has been located within the Youle East drill program. The results are not as high grade as the main portions of Youle and Shepherd. However, like the Shepherd South program, it has shown grade further to the south of current workings. This new veining horizon is approximately 100 m from the Youle access infrastructure and has only been tested locally however it is likely that this mineralization persists to the north alongside Youle. The location of the intercepts can be seen on figure 4 and 6 with the southern-most intercept (BC298) grading 9.98 g/t gold over 0.29 m (ETW 0.12 m). A highlight within this area is 131 g/t gold and 45% antimony over a true width of 7 cm in MB011.

Like the Shepherd veining, the Kendal system is made up of subvertical stibnite-quartz-gold veins. However, instead of residing below Youle the Kendal veining diverges from the top of Youle. This style of veining was prominent within the historic Costerfield mine operated between the 1860s and 1930s. Recent drilling to the south and west of the historic mine has resulted in the upward extension of Kendal veining that was also mined in the initial development of Youle in 2018.

Initial results for this area are encouraging with 40.6 g/t gold and 40.4% antimony over 0.40 m (ETW 0.26 m) in BC308 and 27.8 g/t gold as well as 31.5% antimony over 0.67 m (ETW 0.36 m) in BC328. Geological interpretation of the area so far indicates that the veining exists between two flat lying structures, with the Youle orebody at its base and the number 3 fault at its upper limit. The panel grows in height towards the South and is closed off where the number 3 converges with Youle to the north (Figure 7). The southern extent of the panel is not understood and will be the focus of a coming drill program. 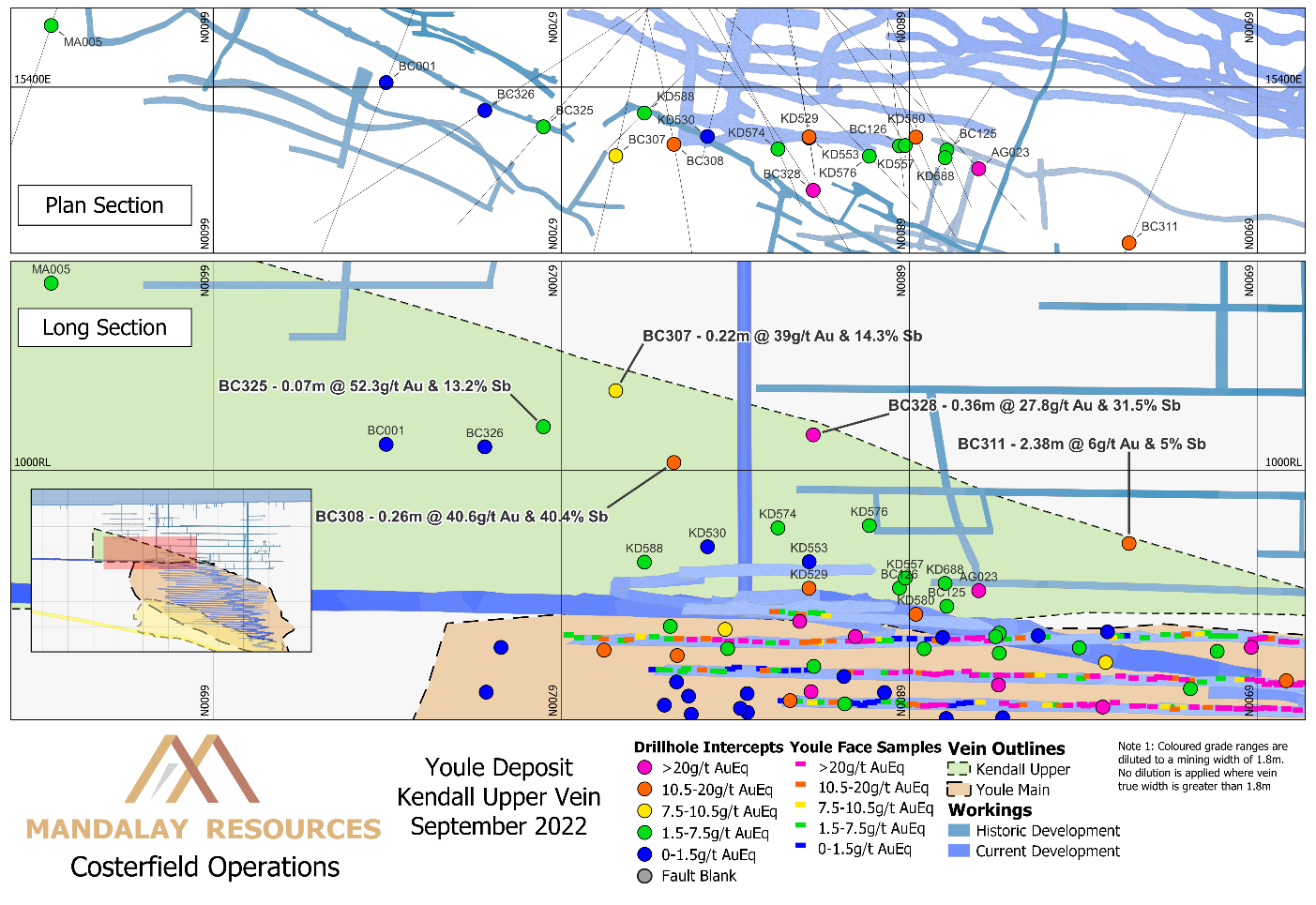 Figure 7. Longitudinal section, with cross section on right hand side, of the newly extended Kendal veining. Results of grade above 1.5g/t AuEq when diluted to 1.8m are also annotated with estimated true width and grade.

All diamond drill core was logged and sampled by Costerfield geologists. All samples were sent to On Site Laboratory Services (OSLS) in Bendigo, Victoria, Australia, for sample preparation and analysis by fire assay for gold, and Atomic Absorption Spectroscopy (AAS) for antimony. Samples featuring coarse grained visible gold were assayed using a variant of fire assay known as screen fire assay. This method is routinely used to mitigate potential problems associated with heterogeneity in the distribution of coarse gold within drill samples. The procedure collects all coarse heterogenous coarse gold by screening at 75µm after crushing and pulverisation, and subsequently fire assays the resultant mass to extinction. A mass weighted average of gold grade of the sample is subsequently calculated from the +75µm and -75µm fractions of the sample. Site geological and metallurgical personnel have implemented a QA/QC procedure that includes systematic submission of standard reference materials and blanks within batches of drill and face samples submitted for assay. Costerfield specific reference materials produced from Costerfield ore have been prepared and certified by Geostats Pty Ltd., a specialist laboratory quality control consultancy. See Technical Report entitled “Costerfield Operation, Victoria, Australia NI 43-101 Report” dated March 30, 2020, available on SEDAR (www.sedar.com) for a complete description of drilling, sampling, and assaying procedures.

Chris Davis, Vice President of Operational Geology and Exploration at Mandalay Resources, is a Chartered Professional of the Australasian Institute of Mining and Metallurgy (MAusIMM CP(Geo)), as well as a Member of the Australian Institute of Geoscientists (MAIG) and a Qualified Person as defined by NI 43-101. He has reviewed and approved the technical and scientific information provided in this release.

Mandalay Resources is a Canadian-based natural resource company with producing assets in Australia (Costerfield gold-antimony mine) and Sweden (Björkdal gold mine). The Company is focused on growing its production and reducing costs to generate significant positive cashflow. Mandalay is committed to operating safely and in an environmentally responsible manner, while developing a high level of community and employee engagement.

Mandalay’s mission is to create shareholder value through the profitable operation and continuing the regional exploration program, at both its Costerfield and Björkdal mines. Currently, the Company’s main objectives are to continue mining the high-grade Youle vein at Costerfield, bring online the deeper Shepherd veins, both of which will continue to supply high-grade ore to the processing plant, and to extend Youle Mineral Reserves. At Björkdal, the Company will aim to increase production from the Aurora zone and other higher-grade areas in the coming years, in order to maximize profit margins from the mine.

3.   Composites that are not interpreted to be connected to a named vein and are below 1 g/t AuEq when diluted to 1.8m are not considered significant and are not recorded here.

Photos accompanying this announcement are available at