MISSISSAUGA, Ontario, Sept. 03, 2021 (GLOBE NEWSWIRE) — Tami Bonnell has been appointed Co-Chair of EXIT’s international organization. Mrs. Bonnell joined EXIT Realty in 1999 and was appointed Chief Executive Officer in 2012. She is a 40-year veteran of the real estate industry and is an internationally renowned and respected leader. Mrs. Bonnell has been recognized as one of the 200 most powerful and influential people in residential real estate and among the top 10 women leaders.

Craig Witt has been appointed CEO of the company’s U.S. organization. Mr. Witt has been with EXIT Realty since 2004. He owned and operated multiple EXIT Realty franchises, rapidly rising through the ranks, and in 2017 he assumed the role of President of the company’s U.S. Division. Mr. Witt works with all levels of the organization to expand EXIT’s footprint across the U.S.

Lori Muller has been appointed President, U.S. Division. Joining the company in 2007, until recently Mrs. Muller was the owner of three EXIT Realty brokerages in Wisconsin and was appointed Vice President of the company’s U.S. Division in 2020. She has a passion for growing people and has served the National Association of REALTORS® and Women’s Council of REALTORS® in a leadership capacity both locally and nationally.

Joyce Paron has been appointed CEO of the company’s Canadian organization. Ms. Paron joined EXIT Realty in 1997 within months of the company’s launch as a District Owner selling franchises in Ontario. Her entrepreneurial drive, along with a background in land development and business management were the precursors to her being named President of the Canadian Division for EXIT in 2001.

These appointments coincide with the company’s 25th anniversary being celebrated on September 3.

“These individuals all have long and esteemed careers with EXIT Realty and unparalleled depth of knowledge and wisdom,” said Mr. Morris. “They work harmoniously in the leadership of our company and will continue to shepherd our tremendous growth under my direction as Founder and Chairman. We heartily thank them for their dedicated service and offer them our warmest congratulations.”

About EXIT Realty: EXIT Realty is a company founded and built on human potential. A full service, forward-thinking, real estate franchisor with offices across North America, EXIT has to-date paid out more than a half a billion dollars in single-level residual income to its associates. The Expert Marketing Suite™ including geolocation Smart Sign™ technology gives sellers an edge in a competitive marketplace. A portion of every transaction fee received by EXIT Realty Corp. International is applied to its charitable fund, and to-date, $6 million has been allocated to charity. For more information, please visit www.exitrealty.com and www.joinexitrealty.com. 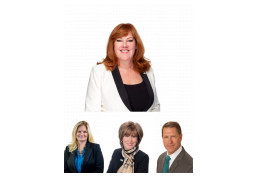