TORONTO, Nov. 29, 2022 (GLOBE NEWSWIRE) — Eloro Resources Ltd. (TSX-V: ELO; OTCQX: ELRRF; FSE: P2QM) (“Eloro”, or the “Company”) is pleased to announce assay results from eight (8) additional diamond drill holes from its on-going drilling program at the Iska Iska silver-tin polymetallic project in the Potosi Department, southern Bolivia. Six of these holes (DSB-35 and DSB-37 to DSB-41) tested the south-southeastern extension of the high-grade feeder zone at Santa Barbara while METSBUG-03 is a metallurgical hole drilled from the Santa Barbara adit underground drill bay. Hole DM2-01 is a reconnaissance drill hole near the Mina 2 adit in the southeast part of the property.

Tom Larsen, CEO of Eloro, said: “Now that the reconnaissance drill holes just released, DSB-38, -39 and -40, are adding a further 500 meters of mineralized strike length, these latest results should add substantial tonnage to our resource model. Infill drilling at a later date should further upgrade and expand the higher metal value zonations that have become characteristic of the Iska Iska system.”

“Given the guidance of our geophysics, if one were to draw a line from Huayra Kasa in the north of the Iska Iska Caldera southwest to Mina Casiterita one can reasonably assume up to a 3 kilometre potential strike length of mineralization given the magnetic data to date,” added Mr. Larsen. “The current strike length, width and depth of the Santa Barbara complex, which is still open in all directions, is pointing to the strong possibility that Iska Iska will become a giant “bonanza style” Bolivian polymetallic discovery.”

Dr. Bill Pearson, P.Geo. Eloro’s Executive Vice President, Exploration commented: “We continue to obtain promising results from our drilling on the High-Grade Feeder Zone at Santa Barbara. The on-strike extension of this zone to the south-southeast is now confirmed for an additional 500m for a total strike length of 1,500m. Geophysical data indicates potential for a further 500m strike length to 2,000m which has been initially tested by the final drill holes in our 2022 program for which results are pending. The width of the Santa Barbara mineralized zone is now up to 1,000m across strike with a depth of at least 800m. The mineralized zone remains open in ALL directions as well as at depth. With completion of our planned drilling program, we are now focussed on working with Micon International to complete the inaugural mineral resource estimate.”

Holes DSB-38, DSB-39 and DSB-40 were drilled on an approximately 1km long section across the central part of the caldera valley approximately 500m south-southeast of the underground drill bay in the Santa Barbara adit as shown in Figure 1. The three holes were all drilled at an azimuth of 2250 with a dip of -600. Collectively, these holes intersected many significant intersections within altered and mineralized dacite including:

Holes DSB-37 and DSB-41 were collared on sections 100m and 300m northwest, respectively, of the DSB-38 to -40 section as shown in Figure 1. Highlights from these holes which intersected altered and mineralized dacite are as follows:

Hole DSB-35 was drilled to test the potential southwest extension of the Santa Barbara High Grade Feeder Zone shown in Figure 1. Sn grades are notably elevated in this area. This hole was collared approximately 300m west-northwest of the underground drill bay in the Santa Barbara adit and was drilled at an azimuth of 2250 with a dip of -600. This hole intersected several significant intersections including:

METSBUG-03 is the third metallurgical drill hole collared from the underground drill bay on the Santa Barbara adit. The hole was drilled at an azimuth of 2700 and a dip of -350 to a length of 707.8m. Significant results are as follows:

Hole DM2-01 is a reconnaissance drill hole collared in the Mina 2 area in the southeastern part of the property. This hole returned several significant short intersections along a structure in the Ordovician basement metasediments as follows:

Sampling of the underground workings at Mina 1, Mina 2, Mina 3 and Mina 4 (Figure 1) has been completed with results pending. Geological mapping is also being carried out in the area to develop a better understanding of the structural controls on mineralization before carrying out further drilling in this target area. 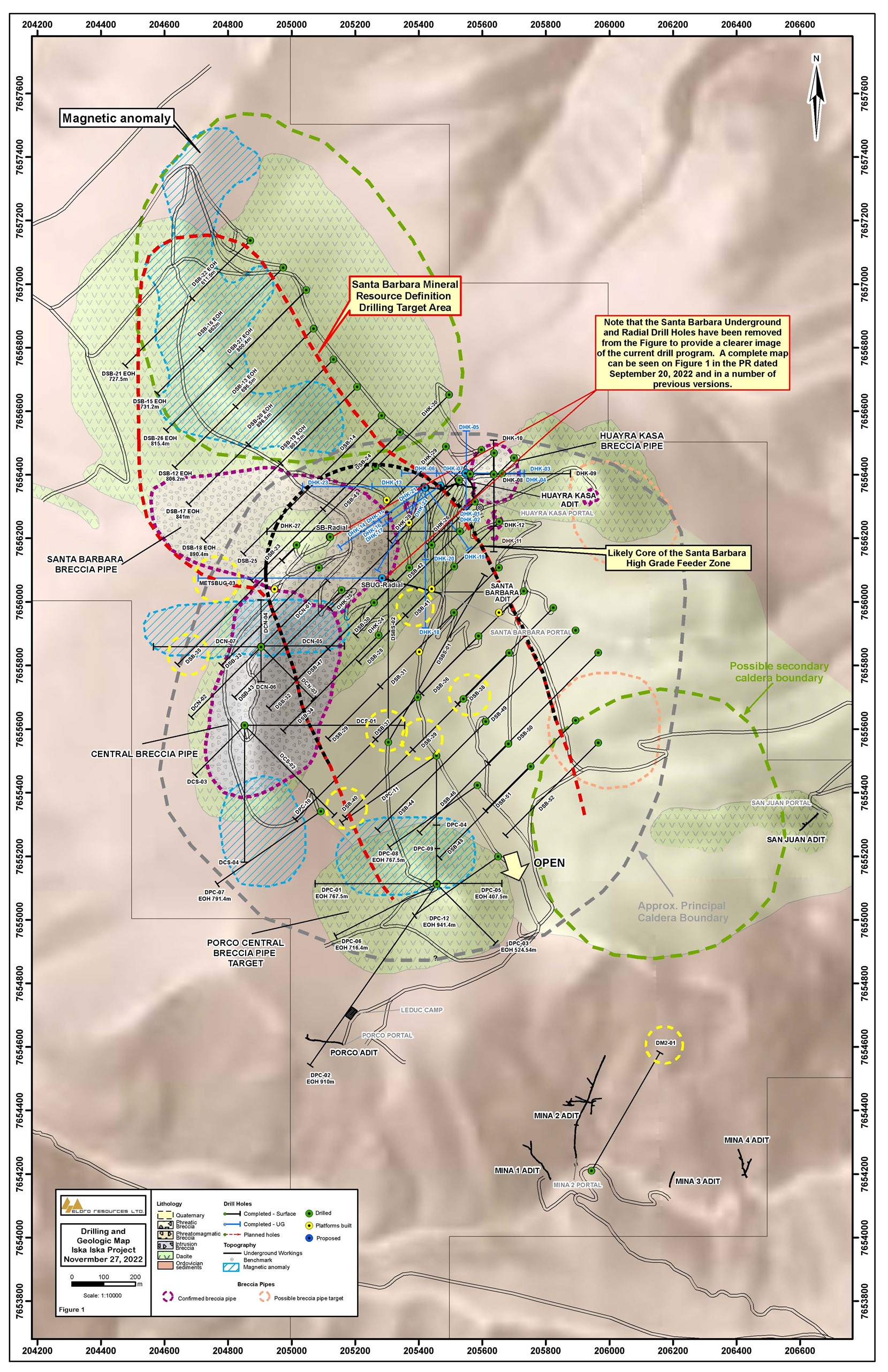 Note: True width of the mineralization is not known at the present time, but based on the current understanding of the relationship between drill orientation/inclination and the mineralization within the breccia pipes and the host rocks such as sandstones and dacites, it is estimated that true width ranges between 70% and 90% of the down hole interval length but this will be confirmed by further drilling and geological modelling.

In calculating the intersections reported in this press release a sample cutoff of 30 g Ag eq/t was used with generally a maximum dilution of 3 continuous samples below cutoff included within a mineralized section unless more dilution is justified geologically.

The equivalent grade calculations are based on the stated metal prices and are provided for comparative purposes only, due to the polymetallic nature of the deposit. Metallurgical tests are in progress by Blue Coast Ltd. to establish levels of recovery for each element reported but currently the potential recovery for each element has not yet been established. While there is no assurance that all or any of the reported concentrations of metals will be recoverable, Bolivia has a long history of successfully mining and processing similar polymetallic deposits which is well documented in the landmark volume “Yacimientos Metaliferos de Bolivia” by Dr. Osvaldo R. Arce Burgoa, P.Geo.

S = Surface UG=Underground; collar coordinates in meters; azimuth and dip in degrees. Total drilling completed since the start of the program on September 20, 2020 to the completion of the Santa Barbara definition drill program on November 27, 2022 is 84,495m in 122 drill holes (32 underground drill holes and 90 surface drill holes).

Eloro is utilizing both ALS and AHK for drill core analysis, both of whom are major international accredited laboratories. Drill samples sent to ALS are prepared in both ALS Bolivia Ltda’s preparation facility in Oruro, Bolivia and the preparation facility operated by AHK in Tupiza with pulps sent to the main ALS Global laboratory in Lima for analysis. More recently Eloro has had ALS send pulps to their laboratory at Galway in Ireland. Eloro employs an industry standard QA/QC program with standards, blanks and duplicates inserted into each batch of samples analyzed with selected check samples sent to a separate accredited laboratory.

Drill core samples sent to AHK Laboratories are prepared in a preparation facility installed and managed by AHK in Tupiza with pulps sent to the AHK laboratory in Lima, Peru. Au and Sn analysis on these samples is done by ALS Bolivia Ltda in Lima. Check samples between ALS and AHK are regularly done as a QA/QC check. AHK is following the same analytical protocols used as with ALS and with the same QA/QC protocols. Turnaround time continues to improve, as laboratories return to more normal staffing levels.

Iska Iska silver-tin polymetallic project is a road accessible, royalty-free property, wholly controlled by the Title Holder, Empresa Minera Villegas S.R.L. and is located 48 km north of Tupiza city, in the Sud Chichas Province of the Department of Potosi in southern Bolivia. Eloro has an option to earn a 99% interest in Iska Iska.

Iska Iska is a major silver-tin polymetallic porphyry-epithermal complex associated with a Miocene possibly collapsed/resurgent caldera, emplaced on Ordovician age rocks with major breccia pipes, dacitic domes and hydrothermal breccias. The caldera is 1.6km by 1.8km in dimension with a vertical extent of at least 1km. Mineralization age is similar to Cerro Rico de Potosí and other major deposits such as San Vicente, Chorolque, Tasna and Tatasi located in the same geological trend.

Since the initial discovery hole, Eloro has released a number of significant drill results in the SBBP and the surrounding mineralized envelope which along with geophysical data has defined an extensive target zone. In its September 20, 2022 press release, the Company reported that new downhole geophysical data has significantly extended the strike length of the high-grade feeder zone at Santa Barbara a further 250m along strike to the south-southeast from existing drilling. The 3D inverse magnetic model which correlates very strongly with the conductive zone suggests that the high-grade feeder zone may extend across the entire caldera for as much as a further 1 km along strike for a total potential strike length of at least 2 km. As reported, the definition drill program has been modified to sectionally drill this potential extension with the intention of defining a major open pittable deposit in the valley of the caldera. As a result, the estimated completion date for the maiden National Instrument 43-101 mineral resource has been pushed back to the end of Q1 2023.

On November 22, 2022, Eloro announced the acquisition of the Mina Casiterita and Mina Hoyada properties covering 14.75 km2 southwest and west of Iska Iska. These properties connect with the TUP-3 and TUP-6 claims previously staked by Eloro. Eloro has also staked additional land in the area. Following the acquisition, the total land package in the Iska Iska area to be controlled by Eloro will total 1,935 quadrants covering 483.75 km2.

Artisanal mining in the 1960’s identified high grade tin (Sn) veins on the Mina Casiterita property that are hosted in an intrusive dacite. Production from 1962 to 1964 is reported by the Departamento Nacional de Geología in Bolivia to be 69.85 tonnes grading 50.60% Sn.

Recently completed magnetic surveys by Eloro has outlined an extensive, near surface, magnetic intrusive body on the Mina Casiterita property immediately southwest of Iska Iska. This intrusive hosts the previously mined high-grade tin veins and is very likely the continuation of the porphyry tin intrusion projected to be below the epithermal Ag-Sn-Zn-Pb mineralization at Iska Iska.

The Porco adit from which previously reported channel sampling returned 103m grading 521 g Ag eq/t (including g 117g Ag/t, 1.44 g Au/t, 0.54% Cu and 0.66% Sn) in altered basement sediments, is located near the northeast part of the magnetic anomaly, attesting to the potential strength and high-grade nature of the mineralized system in the area.

Drilling is planned on Mina Casiterita in Q1 2023 with geological mapping, sampling and geophysical surveys now in progress on the full land package across the Iska Iska region.

Eloro is an exploration and mine development company with a portfolio of gold and base-metal properties in Bolivia, Peru and Quebec. Eloro has an option to acquire a 99% interest in the highly prospective Iska Iska Property, which can be classified as a polymetallic epithermal-porphyry complex, a significant mineral deposit type in the Potosi Department, in southern Bolivia. A recent NI 43-101 Technical Report on Iska Iska, which was completed by Micon International Limited, is available on Eloro’s website and under its filings on SEDAR. Iska Iska is a road-accessible, royalty-free property. Eloro also owns an 82% interest in the La Victoria Gold/Silver Project, located in the North-Central Mineral Belt of Peru some 50 km south of Barrick’s Lagunas Norte Gold Mine and Pan American Silver’s La Arena Gold Mine.

Neither the TSXV nor its Regulation Services Provider (as that term is defined in the policies of the TSXV) accepts responsibility for the adequacy or accuracy of this release.

A photo accompanying this announcement is available at https://www.globenewswire.com/NewsRoom/AttachmentNg/9af7dc7b-aaa9-44ff-9a2f-5cc4b50068c6