The primary objective of the drilling program was to better define and connect the area located between the two pits (Western and Eastern pits) of the Project as defined in its PEA (see news release dated March 4th, 2016). Figure 1 shows the recently completed drill holes in comparison of the previously defined pits.

The Company completed 3,024m of drilling in 32 holes varying in depth between 30 and 180 metres. The total length makes this program the largest drill campaign completed to-date on the Miller Property. The drilling was conducted by Downing Drilling based in Calumet at GSLR. SL Exploration Inc, a mineral exploration service company based in Acton Vale provided the geologists and technicians to complete the program. Core logging and sampling was completed in February 2022 and assays results were fully returned by July 2022. Generally, samples were taken every 1.5-meter interval throughout the core and were assayed for graphitic carbon (Cg) content by an independent laboratory while higher grade mineralization was sampled in smaller intersections to better identify the specific grade. 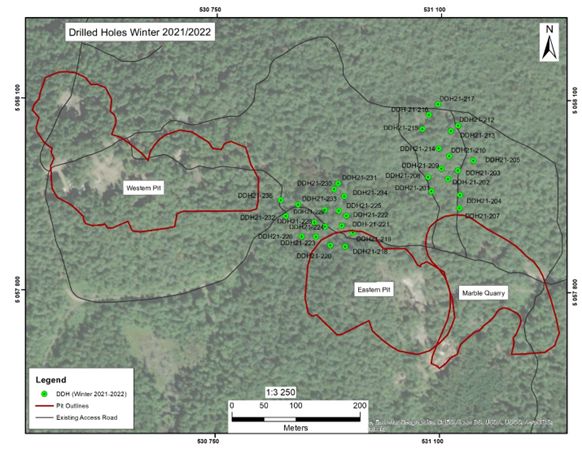 The Miller property host widespread low grade graphite mineralization that allowed to define two pits for the Miller Project. Previous calculated cut-off grade of 0.50%Cg (see news release dated December 14th, 2016) indicate that some material from the current drill program will likely be incorporated into a new model for the Miller mineralisation. A subset of intersections is shown in table 1, below. Note that multiple other graphite intersections were observed in the drilling campaign but are not shown here and will be incorporated in an upcoming resource calculation.

The previously updated Resource Estimate includes an indicated resource of 2.65Mt (“million tonnes”) with an average grade of 0.80% graphite, and an inferred resource of 7.56Mt with an average grade of 0.77% graphite, within the boundaries of an optimized open pit mine model, as shown in table 2, below. The cut-off grade used for the modelling was of 0.50%Cg (see news release dated December 14th, 2016 for additional information).

“The results of the December 2021 drilling program completed at Miller are critical to our ongoing efforts to complete the permitting process for the Miller Project. The drilling intersected multiple widely mineralized zones, as well as multiple graphite pods and veins. This will help to improve the geological model and allow SGS to better define, improve and enhance future pit designs. The work now being undertaken will allow Canada Carbon, Inc. to optimize our environmental management efforts and to proceed with the permitting activities for the Project,” said Ellerton Castor, Chief Executive Officer and a director of the Company.

The results will be used by SGS’s team to update the modelling on the Miller Property in order to update the resource and to update the pit design. This will allow the Company to provide to the CPTAQ some information that they requested in their latest analysis (see news release dated September 17th, 2021). The information will also be used throughout the next permitting stage of the Miller Project, including an upcoming resources calculation and economic studies; as well as to support the permitting process for the Ministry of Environment and Fight against Climate Change (MELCC), the Ministry of Energy and Natural Resources (MERN) and during the consultation process with the citizens of Grenville-sur-la-Rouge (GSLR), the Argenteuil RCM (Regional County Municipality) and other stakeholders.

This press release was prepared by Steven Lauzier, P.Geo, OGQ; and by Pierre-Alexandre Pelletier, P.Geo OGQ, who are qualified persons as defined under National Instrument 43-101, and who reviewed and approved the geological information provided in this news release.